The strong ROOT of the American Scudder Family Tree

was a yeoman in England named Henry

but it took more than 100 years of serious searching to prove it.

Finally, in 1992–3, the Scudder Association had documentary proof that Henry Skudder of Horton Kirby, Kent, d. 1594–5 was the common progenitor of all who descend from three Puritan Scudder immigrants to America. Henry’s will was dated 29 September 1594 and proved 5 November 1595.  Success had come by comparing the will of Rev. Henry Scudder, son of HenryA, with the wills of HenryA and of his brother WilliamA of Darenth, d. 1607.

This discovery dispelled long time myths in print and soon led to answers of other long time questions. The Scudder Association was soon thereafter able to accurately assign relationships between Thomas (T) and his nephew John (J) and niece Elizabeth (E).

For more about how relationships between the immigrants were proven see Straight From The Horse’s Mouth.

To provide our readers with renewed access to the Association’s victory report published in Scudder Searches, Summer 1992, we now reprint its article “Henry Skudder (Scudder), yeoman of Horton Kirby, Kent.”[1]

In Scudder Searches he is referred to as Henry, Sr. To better portray the Scudder family structure with his descendants, in our Scudder Family Historical & Biographical Journal articles, he will now also be known as HenryA Skudder or HenryA Scudder.[2]. The following is quoted from Scudder Searches, Summer 1992:

“Simon Skudder, ‘our man in England,’ has come up with very persuasive evidence from the full text of this Henry’s will that he is in fact (a) father of Thomas Scudder of Salem, MA, progenitor of a large share of the American Scudder family, and (b) brother of William Scudder of Darenth, Kent, England.

“These two facts had long been suspected, largely on the basis of a well-known lengthy abstract of William of Darenth’s will, dated 7 July 1607, probated 4 November 1607, and published by H. F. Waters in Genealogical Gleanings in England (Boston, 1901), pp 768–9. [The abstract of William’s will is to be published in the May 2019 issue.] The identity of this particular Henry was suspected based on a two-sentence abstract of his will discovered in 1972. The full text of Henry’s will provides additional evidence that the above two statements of fact are almost certainly correct. [Italics added to highlight the children’s names.]

“According to the will, Henry was a Kentish yeoman (independent farmer, landowner) who, on the basis of his extensive landholdings, must have been quite affluent. At the time he signed the will, 29 September 1594, Henry and his wife, identified only as Elizabeth, had eight children: three sons and five daughters, as follows: Henry, Jr (the Reverend), Thomas (of Salem), John, Elizabeth, Bridgett, Alice, Martha, and Jane. (By the time the will was probated, 5 November 1595, Jane’s name had been crossed out, apparently indicating that she had died during the intervening 13 months.)

“The children were relatively young at the time, indicating that Henry probably was in his late forties or very early fifties at the time of his death. Only Elizabeth, and possibly Bridgett, were as old as 20. Not one of the three sons had reached the age of 18. Henry’s lands went to the sons, the largest share to Henry, Jr, who clearly was the eldest; the daughters received mostly cash and household goods.

“The will identifies Henry’s landholdings as being within the parishes of Horton Kirby and Sutton-at-Hone, and ‘elsewhere within the County of Kent.’ (For the locations of these two parishes, please see the map of West Kent parishes [last page of this present article.][3] Henry, Sr’s specific landholdings as listed in the will and the sons to whom he bequeathed them are as follows: 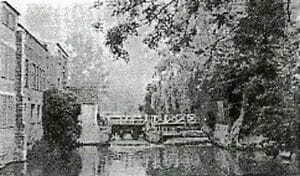 (a) ‘The mansion house where I now dwell,’ with its appurtenant lands, houses, and edifices (apparently in Horton parish, and quite extensive): and

(b) a house in the Chalkdale (not located).

(a) house now in tenure of Timothy Skudder (unidentified), with appurtenances;

(b) house now in tenure of Michall Pickwell, with an acre of land adjoining lately bought of John Mayehewe, including orchards, gardens, and appurtenances;

(c) house now in tenure of Christopher Harris, with an acre of land adjoining to (1) the highway from Fawkham to St Mary Craye, (2) the lands of Thomas Walter on the east, and (3) to ‘my own lands on the north and west;’ [presumably the lands appurtenant of the ‘mansion house’], together with all appurtenances.

“To John: The tenement and lands purchased of Francis Reeve now in the tenure of

Thomas Adam, with all appurtenances.

“The will provides that Elizabeth, his wife, shall retain custody of and enjoy the profits from these lands until Henry’s sons reach the ages of 18, provided that she bring up the sons decently and orderly, ‘according to law and conscience.’

“But if Elizabeth were to die before all his sons reach age 18, the will provides that John Humfrey the elder, ‘my brother William Skudder,’ and Anthony Comfot (?) shall use the profits from the lands still undistributed to bring up any son or sons still under the age of 18. 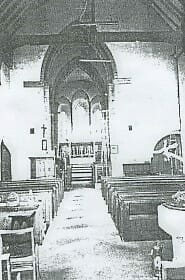 “The evidence provided by the full text that this Henry is in fact father of the Rev Henry and Thomas of Salem is obtained by comparing it with the will of the Rev Henry [to be reproduced in May 2019]. First, the Rev Henry in his will bequeathed to his daughter Bridgett Graile two houses in ‘the Chalkdale of Horton parish,’ one of which must be the same property willed to him by his father. Second, the Rev Henry bequeathed to his daughter Martha Jacob and his granddaughter Elizabeth Tombes a total of three tenements in Chappel Greene in Horton parish. These clearly must have been the three tenements originally bequeathed to Thomas of Salem, which apparently had been conveyed by Thomas to his brother when Thomas removed to New England. Third, based on the documentary information we have of the marriages and births of the children and grandchildren of Thomas of Salem, we have judged that Thomas was born during 1586–91 and the Rev Henry a few years earlier (see Scudder Searches, v. I, no. 2, p. 6). This implies that Thomas would have been age 3–5 at the time Henry, Sr., signed his will, and the Rev Henry perhaps 8–13, which ages are fully consistent with the will.

“The evidence that this Henry, Sr, is a brother of the William Scudder of Darenth also seems very persuasive. First, Henry, Sr, states he has a brother named William who lived close enough to Horton parish to have been in a position if necessary to help supervise the upbringing of the Rev Henry, Thomas and John. Second, William of Darenth in his will identifies a brother Henry, deceased, along with this Henry’s three sons Henry, Jr, Thomas and John. Third, Henry, Sr, lists a ‘John Humfry the elder’ along with his brother William as among those requested to take charge of the upbringing of his three sons in the event of their mother’s death. This same John Humfry (or possibly a son John Humfrey the younger) was later appointed by William of Darenth to assist his wife Margery in executing his will.

“While this evidence is circumstantial, and some items taken individually could be construed differently, taken all together it seems to provide overwhelming support—that Henry, Sr, is father of the Rev Henry and Thomas of Salem, and the Henry, Sr, and William of Darenth are brothers.”

See the transcription of the 1594 will of Henry Skudder as published in 1992 in Scudder Searches. Original spelling is retained.

[1] David B. Scudder, ed., “Henry Skudder, Yeoman of Horton Kirby, Kent,” Scudder Searches, volume IV, no.  3, (Summer 1992): 3–4.
[2] To describe Henry Scudder, yeoman of Horton Kirby, our new publications will refer to him as HenryA Scudder, the common ancestor of the immigrants. This will assist in clearing up some confusion in print about the relationships among the immigrants. HenryA’s sons Rev. Henry1, Thomas1 and John1 will share the same generational number “1” to show their proper relationships. Therefore, their children will be generation “2”. There has been confusion about the relationships between Thomas1 (T), John2 (J) and Elizabeth2 (E) because of their immigrant ancestor status designating them as “generation 1” to each of their descendant lines; but they were not the same generation in the family structure. The mother of John1 (J) and Elizabeth1 (E) was technically the first generation immigrant ancestor for their lines because she came about 1640 with Elizabeth (E), of whom more in a later issue
[3] “Map: West Kent Parishes,” First published in Scudder Searches, volume IV, no. 1, (Winter 1992): 13. 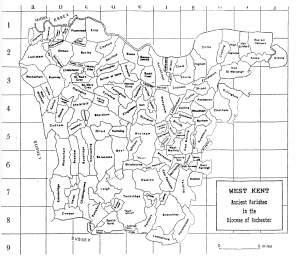