The Scudder Association met in Hull, Massachusetts at the Nantasket Beach Resort on October 12- 14, 2018. The Reunion was very special this year.  It was held in the Boston area to celebrate the 200th anniversary of Dr. John Scudder and his wife Harriet’s departure from Boston for the Far East to begin the tradition of the Scudder  family’s medical missionary work which has continued unabated to this day.

he Reunion began with the Annual Meeting of Members on Friday, October 12th.  The Meeting was called to order at 6pm by President Charles S.K. Scudder with the Invocation given by Liz Shaker, long time member and past Association Secretary. Hadley Bazarsky, the current Secretary, declared that a quorum of Members was present in person or by Proxy

Charles welcomed the attendees and gave his “State of the Association” address.  Follow this link to see the complete address.

Two matters were submitted to the Membership for approval at the Meeting.

The first was adoption of the new By–Laws.   A draft of the new By–Laws had been circulated to the Membership in September.  A Summary of the New By-Law changes and the Full text of the new By-Laws may be reviewed here. One of the most notable changes in the New By-Laws is the renaming of the association as “The Scudder Association Foundation, Inc.”  to better reflect the nature of the organization and its status as a foundation under the IRS Code.  The Former By-Laws were also made available to the Members as part of the voting process.

The second matter submitted to the Membership was the election of a slate of Directors to serve for a three (3) year term commencing on the date of the Meeting.  The individuals proposed for election were: Arthur Bunce, Shoreham, New York; Buddy Scudder, Norwalk, Connecticut; Betsy Steel, Miami, Florida; William Scudder, Exton, Pennsylvania; and Margery Boyden, Alpine, Utah

Both matters were adopted and approved by the Membership

Having no further business to be presented to the Membership the benediction was offered and the Meeting was adjourned. 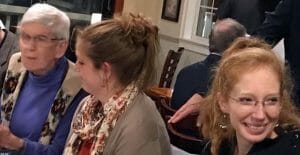 Cy Sherman and her Granddaughters Lindsey and Cindy Sherman

Following the meeting the attendees went to Jake’s Seafood restaurant in Hull, MA. Everyone enjoyed themselves Greatly.

After a wonderful dinner of various seafood delicacies, we returned to the resort to view an impressive video presentation by Dr. Allison Taylor, daughter of Drs. Susan and James Taylor (Finance Chair) who is in her final year of medical studies and spent a month at the Christian Medical College working in most departments. Use this link to see the post on Allison’s journey and her family’s support of the hospitals in India and Arni School.

The reunion continued on Saturday Oct 13th with a tour of Boston proper and a guided tour of the ‘Old North Church’.  The enduring fame of the Old North Church began on the evening of April 18, 1775, when the church sexton, Robert Newman, and Vestryman Capt. John Pulling, Jr. climbed the steeple and held high two lanterns as a signal from Paul Revere that the British were marching to Lexington and Concord by sea across the Charles River and not by land. This fateful event ignited the American Revolution. Robert and John barely escaped by jumping through the church window pictured above. Dr John Scudder attended services prior to his departure to the far east 200 years ago.

After our visit to the Old North Church everyone was on their own to tour the area before heading back to the hotel to prepare for our get together that evening. On Saturday evening, following a wonderful dinner at the Nantasket Beach Resort, Honorine Ward, MD, Chair of the Vellore CMC Foundation Board, gave a presentation on the CMC Foundation and the work it does to support the college, hospital and other projects in India.

The reunion concluded on Sunday without any organized activities so participants could return to Boston or tour the local area.